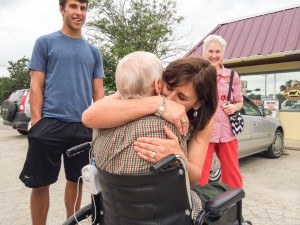 My sister Tanya, nephew William, and my mother greet my dad as he arrives at Triple T Grill on Alzheimer’s Association’s Longest Day.

I had two goals in mind when I set up Burgers for Bill as a part of the Alzheimer’s Association’s The Longest Day Campaign: (1) to raise some money to battle this brutal disease; and (2) to give friends and family a chance to remember and honor my father.

And I’m happy to say that I believe I achieved both goals. I know that more than $1,200 was donated to the Alzheimer’s Association through the Burgers for Bill team, and I think the effort got the attention of a lot of people who might not have been aware of The Longest Day efforts, which according to the Alzheimer’s Association involved more than 1,100 teams and raised millions of dollars this year.

Stolen Away by Alzheimer’s

Even better, as far as I’m concerned, is how the June 21 event allowed a lot of people to remember and honor my father—and even gave him the opportunity to enjoy some of that attention. Alzheimer’s is such a sneaky disease; it takes a person away little by little, year by year, until only a shell of a once-vibrant person remains—and even that shell is usually tucked away somewhere out of sight from most of the world. 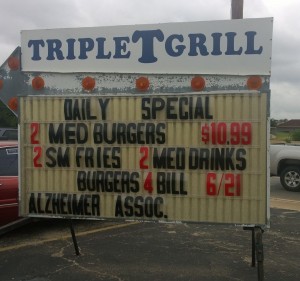 Burgers for Bill created an event that brought my dad back into view for a little bit through the Triple T Grill, the little hamburger restaurant he opened in 1983. As I mentioned in my previous post, Jerry Shepherd, who has owned the grill since he bought it from my dad in 1998, agreed to donate $1 from every Saturday Special sold on June 21 to Burgers for Bill and to collect donations for the Alzheimer’s Association directly. He spread the word through notices in the local newspaper, radio station promos, Facebook notifications, flyers, and a mention on the marquee outside the Triple T.

That kind of effort does not go unnoticed in a town of under 20,000 people. Jerry said the grill got calls about the event all week. People all over town stopped my mother to ask her about the event. Many of them wanted to share memories they had of my father, particularly of the way he always made them feel special when they ate at his little restaurant. My friends and my sister’s friends reminisced about my dad in Facebook posts.

The Triple T Grill was bustling as usual on The Longest Day–actually a little more than usual. Jerry told my mom and sister that they had used more than double the amount of meat by 1 p.m. that day as they would on a normal Saturday. (By the end of the day, the Grill would sell 52 Saturday Specials, receive almost $100 in a cash donation jar, collect a check or two, and match the funds they had raised to make a $300 donation to the Alzheimer’s Association in honor of my father.) I got emails and Facebook notifications from friends around the country letting me know they were eating a burger on Saturday and thinking of Daddy. Every comment, every scrap of a story about him, every donation made to the team was like a ray of sunshine for my family. When you’re walking through the valley of Alzheimer’s there is nothing more comforting and encouraging than knowing your loved one is remembered. 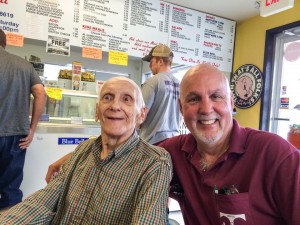 But the most satisfying part of The Longest Day for all of us was the chance to bring my father to the hamburger house he had built–and named after his three daughters, Tammy, Tanya, and Traci. The nursing home where my father now lives arranged to transport him to the Triple T Grill on June 21 so he could join some of the fun himself.

Since I live 1,500 miles away from my parents, I couldn’t join them, but Tanya was there, along with her husband and youngest son. According to them, Daddy was very aware of his surroundings and was thrilled to again be at the Triple T Grill, a place he had not been able to visit in several years. The pictures Tanya sent prove it. 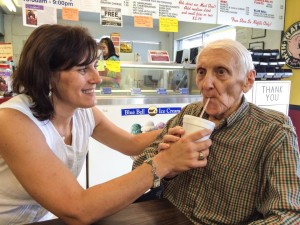 Daddy can’t eat real burgers any longer, but he still knows what to do with a good chocolate shake! 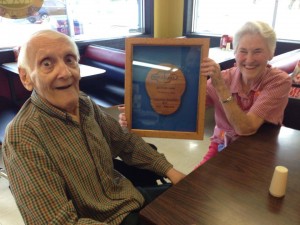 My parents with a plaque made for my dad by one of his Triple T employees.

The Burgers for Bill team didn’t come close to joining the rank of the top fund-raising teams for the Alzheimer’s Association Longest Day event. But it was so deeply meaningful for my family to find a way to make Daddy feel special in a place where he had given so much of his life to making his customers feel special.

So today, I want to say thanks to everyone who donated to Burgers for Bill or publicized the effort and to the Alzheimer’s Association for providing a way to make The Longest Day a memorable one for my dad and millions of people like him.

Thanks especially to Jerry Shepherd and the Triple T Grill for creating such a special way of honoring my dad and to the staff at Senior Care of Brownwood for ensuring Daddy could make the outing. And thanks to the many friends and family who took the time to read about Burgers for Bill, comment on Facebook posts or photos, or just eat a burger in my dad’s honor.

Your generosity, kind words, and demonstrations of support give us strength and comfort.

I had a book manuscript that had a thorough edit by a copy editor, but there were many changes made and I wanted another set of eyes to look at  it carefully. So I hired Tammy Ditmore to do a “fina… END_OF_DOCUMENT_TOKEN_TO_BE_REPLACED

Tammy is just amazing. Before my book made it over to Tammy, I had used two editors — one a well-known author in NYC. I was unhappy with the editing, and basically Tammy was my last try before I jus… END_OF_DOCUMENT_TOKEN_TO_BE_REPLACED

I appreciate Tammy’s willingness to ask questions when appropriate, flex on deadlines, offer sound advice, and rewrite sentences or sections as needed. Her command of substantive and copy editing ma… END_OF_DOCUMENT_TOKEN_TO_BE_REPLACED

Tammy was a pleasure to work with on my manuscript. Her honoring of my voice was top notch. She entered my story so thoroughly and went above and beyond to make my words shine brighter than I could h… END_OF_DOCUMENT_TOKEN_TO_BE_REPLACED

Tammy is much more than an enormously talented editor. For me, she was my guiding light during the critical final stages of the evolution of my book. Not only can she transform a manuscript by making … END_OF_DOCUMENT_TOKEN_TO_BE_REPLACED

Personally, I feel the editing process is the most important aspect of writing–it can be a nightmare if the editor and the writer are not on the same page. … Tammy knows what she is doing, she is easy… END_OF_DOCUMENT_TOKEN_TO_BE_REPLACED

I highly recommend Tammy Ditmore to you. She has edited three of my books in the past two years. Each time, I have been impressed with her professionalism, and pleased with her ability to provide a po… END_OF_DOCUMENT_TOKEN_TO_BE_REPLACED