I just returned from a week-long Texas college exploration trip with my soon-to-be 17,  soon-to-be high-school-senior son. 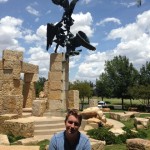 Jonathan got to see Jacob’s Ladder in Abilene …

Covering more than 950 miles on the ground in six days, we toured three Christian universities; savored Tex-Mex, Texas-sized burgers, Texas barbecue, and Texas-style chicken fried steak; delighted in an early-morning, window-rattling thunderstorm; and enjoyed the gracious hospitality of friends and family from Lubbock to Austin.

and the Baylor bear in Waco.

We planned this trip with my son’s future in mind. Jonathan thinks he might like to attend college outside of California, where he has lived his whole life, so this weeklong trip gave him a chance to consider some universities and also gave him a glimpse of what life might be like in three distinctly different Texas cities.

In that sense, the trip was a success; I think he now has a clearer sense of what life could be at a small university in Lubbock, a medium-sized one in Abilene, and a larger one in Waco. I think he realizes now more clearly than he did before that there is no one perfect place—that there are advantages and disadvantages to each.

What I hadn’t quite expected was that the trip would also serve to re-connect me in many ways to my past. I spent the first 32 years of my life in Texas, mostly in or around the areas we visited last week, and this trip gave me chances to spend some time with people who have meant so much to me at various times of my life.

I spent an hour visiting with Doug Mendenhall, who showed me all the changes in the Abilene Christian University communication facilities, where he and I had spent many hours during our own college days and where he now teaches. We ate dinner in a favorite Abilene spot with Robyn, Paul, and Christopher Paul Wertheim, a family who remembers celebrating Jonathan’s first birthday with us in California. 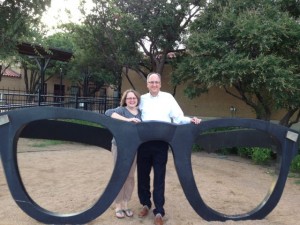 Lucy and Tim Perrin at the Buddy Holly Museum in Lubbock.

Tim and Lucy Perrin arranged a personalized tour of the Lubbock Christian University campus, opened their home to us, and arranged for Steve and Emily Lemley to join us for dinner where we spent several hours catching up. The Perrins and the Lemleys were two of the first families to welcome us to California in 1993; Lucy and I were both raising young children in a place far from the comforts of grandparents and cousins; we gathered first-hand experience about earthquakes and wildfires together and shared many life-shaking events before they all moved back to Texas a couple of years ago.

Lane, Sandy, and Calvin Smith drove 30 miles after a long workday to have dinner with Jonathan and me. Sandy and I have known each other since elementary school; we were friends in high school and college roommates. I was with her the night she met Lane and standing beside her the day she married him a couple of years later. The last time we remember sitting down to share a meal together, our teenage sons were toddlers. But there were no awkward pauses in conversation—in fact, we barely noticed when the waiter stopped coming by after a couple of hours to ask if we wanted refills on our iced tea.

Between campus visits, we spent a night with my mother, and I got a chance to help her cook dinner and to play a game of dominoes with my father. I even got to give my sweet daddy a kiss on his birthday. 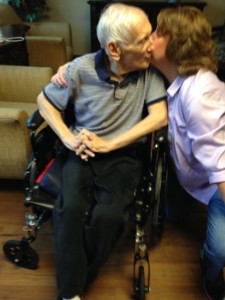 It was a quick visit with my dad, but I got to give him a kiss on his birthday.

On our final night in Texas, we enjoyed a mini-family reunion in Austin. My youngest sister, Traci, drove several hours from her home in Bryan so we could all meet up as my sister, Tanya, got off work. Nine of us—including my two sisters, my two brothers-in-law, a couple of nephews and a niece—spent the evening over dinner and then coffee in a nearby outdoor mall area, where we drank Starbucks and chatted late into the night. 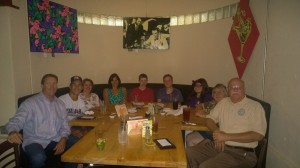 It was only for a few hours, but dinner and coffee with my sisters and their families is a rare treat.

I even managed to squeeze in one last visit on our way to the airport, having breakfast with LaDonna Massad before she took us to the airport. LaDonna and I started working at the Austin American Statesman a few months apart in 1987, had our first babies one week apart in 1992, and in the 21 years since I moved away have rarely gone more than a few months without some kind of conversation—originally through handwritten letters and carefully timed long-distance phone calls, and now more frequently through email, Facebook, or unlimited cell-phone minutes.

Even more, though, I hope the non-campus visits helped him understand what it can feel like to sit down with friends you haven’t seen in years and laugh and talk like you’ve never been apart. Because as much as I want him to get a good college education and find a rewarding career, I realized on this trip that I want even more for Jonathan and his older brother. Today, after a trip that gave me glimpses into my son’s future and my own past, I offer this prayer for Jonathan and his brother:

May God grant you close friends and family in every phase of your life–people who will walk beside you, laugh with you, cry with you, and take a piece of your heart when they move away.

I had a book manuscript that had a thorough edit by a copy editor, but there were many changes made and I wanted another set of eyes to look at  it carefully. So I hired Tammy Ditmore to do a “fina… END_OF_DOCUMENT_TOKEN_TO_BE_REPLACED

Tammy is just amazing. Before my book made it over to Tammy, I had used two editors — one a well-known author in NYC. I was unhappy with the editing, and basically Tammy was my last try before I jus… END_OF_DOCUMENT_TOKEN_TO_BE_REPLACED

I appreciate Tammy’s willingness to ask questions when appropriate, flex on deadlines, offer sound advice, and rewrite sentences or sections as needed. Her command of substantive and copy editing ma… END_OF_DOCUMENT_TOKEN_TO_BE_REPLACED

Tammy was a pleasure to work with on my manuscript. Her honoring of my voice was top notch. She entered my story so thoroughly and went above and beyond to make my words shine brighter than I could h… END_OF_DOCUMENT_TOKEN_TO_BE_REPLACED

Tammy is much more than an enormously talented editor. For me, she was my guiding light during the critical final stages of the evolution of my book. Not only can she transform a manuscript by making … END_OF_DOCUMENT_TOKEN_TO_BE_REPLACED

Personally, I feel the editing process is the most important aspect of writing–it can be a nightmare if the editor and the writer are not on the same page. … Tammy knows what she is doing, she is easy… END_OF_DOCUMENT_TOKEN_TO_BE_REPLACED

I highly recommend Tammy Ditmore to you. She has edited three of my books in the past two years. Each time, I have been impressed with her professionalism, and pleased with her ability to provide a po… END_OF_DOCUMENT_TOKEN_TO_BE_REPLACED