Father’s Day hasn’t been an easy day for me since my father started slipping down the rabbit hole of Alzheimer’s disease. It’s not that I don’t want to celebrate my father and all the ways he worked for me and loved me; it’s just that it’s difficult to know how.

I live 1,500 miles away, so I can’t drop by his nursing home for a visit. Last year, I called and talked with him for a few minutes, but he can’t talk much these days.

Shopping for gifts is worse. What do you get the man who has no hobbies, no activities, travels nowhere, and doesn’t quite know what to do with a wrapped package? For a while, I sent him food—especially candies and cookies and anything sweet, which he loved. But he can’t eat so well now, and it’s hard to send pureed brownies through the mail.

But this year I’ve found a way to honor him—even if he won’t know it. It’s called Burgers for Bill, and I’m counting it as my Father’s Day gift to my dad even if it won’t fully unfold until six days later. 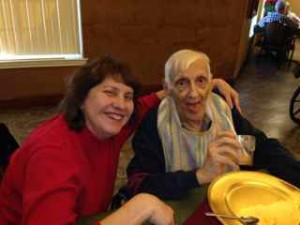 That day will be June 21, the summer solstice, The Longest Day, according to the Alzheimer’s Association, which is encouraging people all over the world to use the day to raise money to battle this disease. Some teams are raising money by holding fishing or bridge tournaments; other people are running or climbing mountains in honor of loved ones.

My dad didn’t fish or play bridge or climb mountains, and I can’t ever remember seeing him run. But he did love to make and eat hamburgers. In 1983, he opened the Triple T Grill in Brownwood, Texas, in a mostly residential neighborhood a few miles from a plethora of fast-food franchises along the highway. Many people predicted he would fail.

But he didn’t. Instead, the little dining room overflowed at lunch from the first day, and the drive-through line often snaked all the way around the tiny building. Daddy succeeded beyond even his own expectations because he believed in simple but good food and in pleasing his customers.

Nothing made Daddy happier than making someone happy. And his customers were very happy with the way he made burgers, and shakes, and fries, and vanilla Dr Peppers, and the way he remembered the distinctive touches for each order, and the way he tried to make everyone feel special. Although he sold the business and retired in 1998, many people in Brownwood still remember him as the Triple-T-Grill man.

For the Longest Day, what better way could I honor my dad than by asking people to eat a burger in his honor? So I created the Burgers for Bill team with a very simple concept: enjoy a burger the way my dad would if he could and make a donation to the Alzheimer’s Association in his name.

If you’re in Brownwood, Texas, on June 21, you can actually do both at the same time—at the Triple T Grill, of course. Jerry Shepherd, the current owner of Triple T, is eager to promote Burgers for Bill because he knows how much my dad loved the Grill and the community he built there.

So Jerry has promised to donate a dollar for every Saturday Special that he sells on Saturday, June 21, to the Burgers for Bill team. He will also be accepting direct donations to Burgers for Bill from the store that Bill built.

If you can’t get to the Triple T Grill that day, you can still support the team. All you have to do is eat a burger—make it yourself or buy it from your favorite place. Just enjoy it the way Bill would if he could. And donate to the Burgers for Bill team in his honor by going to this Burgers for Bill webpage. Use the bright yellow DONATE button on the right-hand side of the page to donate immediately using a credit card.

Or you can send a check made out to the Alzheimer’s Association to Tammy Ditmore, 501-I South Reino Road, #194, Newbury Park, CA 91320. All donations sent this way will be made in Bill’s honor.

People often ask if my dad still recognizes me; so far, I can truthfully say, “I think so,” even though I’m not sure he can always call my name. But really, it doesn’t matter a lot to me if he recognizes me—because I still recognize him. And I’m thrilled to find this small way to strike a blow against the disease that has robbed him—and me—of so much.

Tammy was a pleasure to work with on my manuscript. Her honoring of my voice was top notch. She entered my story so thoroughly and went above and beyond to make my words shine brighter than I could h… END_OF_DOCUMENT_TOKEN_TO_BE_REPLACED

Tammy is much more than an enormously talented editor. For me, she was my guiding light during the critical final stages of the evolution of my book. Not only can she transform a manuscript by making … END_OF_DOCUMENT_TOKEN_TO_BE_REPLACED

Tammy Ditmore was the consummate professional. She was very humble in dealing with me and tailored her editing style to fit my specific needs. She was prompt and punctual with deadlines and was very o… END_OF_DOCUMENT_TOKEN_TO_BE_REPLACED

Tammy is just amazing. Before my book made it over to Tammy, I had used two editors — one a well-known author in NYC. I was unhappy with the editing, and basically Tammy was my last try before I jus… END_OF_DOCUMENT_TOKEN_TO_BE_REPLACED

I had a book manuscript that had a thorough edit by a copy editor, but there were many changes made and I wanted another set of eyes to look at  it carefully. So I hired Tammy Ditmore to do a “fina… END_OF_DOCUMENT_TOKEN_TO_BE_REPLACED

She worked with me chapter-by-chapter over the course of nearly a year to hone my writing through attention to style, organization, and mechanics. Her close reading and keen eye have been invaluable d… END_OF_DOCUMENT_TOKEN_TO_BE_REPLACED

Personally, I feel the editing process is the most important aspect of writing–it can be a nightmare if the editor and the writer are not on the same page. … Tammy knows what she is doing, she is easy… END_OF_DOCUMENT_TOKEN_TO_BE_REPLACED

Celebrating Those Who Go Forth

The Fourth of July looks a little different to me this year. That’s because it’s only been a few days since my husband...