Every Memorial Day, I find myself musing about a man I never met. He was my husband’s uncle, but Michael never met him either.

This would-have-been uncle-in-law died while fighting in the Pacific Theater sometime during World War II. The man I’ve only heard about was referred to as “June” by my late father-in-law and his siblings; Michael assumes that less-than-masculine nickname was a shortened form of Claude Ditmore Jr., but he’s not totally sure. 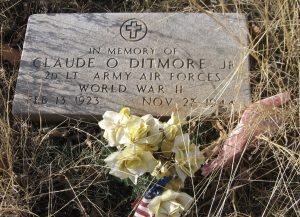 The family gravesite includes a marker but never held a body.

I’ve never learned a lot about June’s death, other than he was officially declared missing in action when his plane was shot down somewhere in the Pacific theater. No body was ever recovered for his heartbroken parents to bury. After the war, a veteran from a neighboring town reportedly visited the family and claimed he had seen June’s body on a beach during a fierce battle. He told the family to abandon all hope that June would ever come home, that he was definitely dead even if the U. S. military could not account for him.

Recently, Michael did a little more digging through military records and histories and found that his uncle was reported missing in action over the Island of Leyte in November 1944 and officially declared dead in November 1945. The records hint June was on a transport plane carrying troops either to or from an R&R leave, but the plane apparently crashed and no wreckage was ever found. He was 21 years old when his plane went down.

I’m not sure anyone who ever knew June is still alive. His parents and siblings are all dead. He didn’t live long enough to marry or have kids of his own. He never knew any of his nieces and nephews or their families. If any friends from his childhood have survived, they would be nearing 100 and might have trouble recalling anything about the boy who died more than 75 years ago.

When our two sons were younger, we stopped off a couple of times in Bronte, Texas, to make sure they saw June’s name on the war memorial that stands in the center of town. That is about all we can give to them of this long-lost relative. We don’t tell stories of June’s heroism because we simply don’t know any. We don’t make June into a larger-than-life figure because we wouldn’t know how to do that. But we don’t want our sons to forget that a close family member paid the ultimate price in a war that changed the world forever. 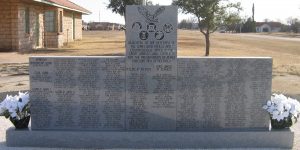 Remembrance in Place of Memories

But there are no cousins to visit, no family memories to share. The details of June’s brief life have been mostly lost with the deaths of his brothers and sister. A name on a faded memorial remains. And I am grateful for that memorial and for a day set aside to help me remember this man I never knew. And to honor the many men like June who fought and died so young that they left behind little more than a legacy of service and sacrifice.

I had a book manuscript that had a thorough edit by a copy editor, but there were many changes made and I wanted another set of eyes to look at  it carefully. So I hired Tammy Ditmore to do a “fina… END_OF_DOCUMENT_TOKEN_TO_BE_REPLACED

Tammy is just amazing. Before my book made it over to Tammy, I had used two editors — one a well-known author in NYC. I was unhappy with the editing, and basically Tammy was my last try before I jus… END_OF_DOCUMENT_TOKEN_TO_BE_REPLACED

I appreciate Tammy’s willingness to ask questions when appropriate, flex on deadlines, offer sound advice, and rewrite sentences or sections as needed. Her command of substantive and copy editing ma… END_OF_DOCUMENT_TOKEN_TO_BE_REPLACED

Tammy was a pleasure to work with on my manuscript. Her honoring of my voice was top notch. She entered my story so thoroughly and went above and beyond to make my words shine brighter than I could h… END_OF_DOCUMENT_TOKEN_TO_BE_REPLACED

Tammy is much more than an enormously talented editor. For me, she was my guiding light during the critical final stages of the evolution of my book. Not only can she transform a manuscript by making … END_OF_DOCUMENT_TOKEN_TO_BE_REPLACED

Personally, I feel the editing process is the most important aspect of writing–it can be a nightmare if the editor and the writer are not on the same page. … Tammy knows what she is doing, she is easy… END_OF_DOCUMENT_TOKEN_TO_BE_REPLACED

I highly recommend Tammy Ditmore to you. She has edited three of my books in the past two years. Each time, I have been impressed with her professionalism, and pleased with her ability to provide a po… END_OF_DOCUMENT_TOKEN_TO_BE_REPLACED