I was privileged last week to participate in an intimate meeting with Julia Brownley, the woman who represents my area in Congress. It was an honor to be able to shake hands with Rep. Brownley and then sit down with five other women to discuss an issue that is near to our hearts: the true toll of Alzheimer’s disease and the battle against it. 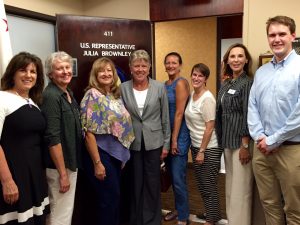 Congresswoman Julia Brownley, center, listened to our stories of how Alzheimer’s has touched our lives.

All six of us have had up-close and too-personal experiences with Alzheimer’s, and all of us wanted to remind Rep. Brownley that this disease, which has no cure, affects more than 5 million Americans and puts enormous burdens on families. Brownley has co-sponsored legislation in Congress that will boost funding for Alzheimer’s research and provide more resources for families and health-care providers.

The six of us were representing the local chapter of the Alzheimer’s Association — and our loved ones who have suffered from the disease. We thanked Brownley for her support and encouraged her to keep fighting to make Alzheimer’s research and support a priority in Congress.

I was especially grateful for a chance to point out a popular fallacy about Alzheimer’s: that it is primarily a memory-loss disease. People who have not witnessed Alzheimer’s in a family member or close friend too often do not realize that confusion and memory loss — the disease’s most famous hallmarks — are just the early stages.

What Could Be Worse? 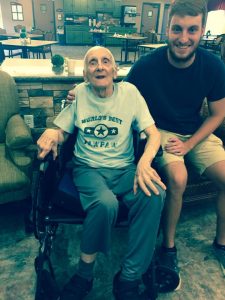 During the years that my dad was suffering with Alzheimer’s, people would often ask me if he still recognized me. I came to see the question as a mark of “Alzheimer’s innocence” — a sign that the person asking it didn’t know much about the disease. What could be worse, they seemed to be saying, than the day a loved one’s memory bank no longer contains you? But anyone who has seen the disease up close knows there is worse. Much worse.

As it progresses, Alzheimer’s robs its victims of far more than memories. It strips them of the ability to walk and talk, use a spoon or fork, digest food correctly, fight off infections, and — ultimately — even to swallow or breathe.

Many Alzheimer’s victims do lose their ability to recognize loved ones. My father did not. Although he could say very little, his eyes would light up in a way that left no doubt. My son Tyler was certain that his Papa recognized him last summer — even though he had not seen his grandfather in more than a year. But, as is obvious from this photo, my father had lost a lot more than his ability to recognize his family.

When we first left him in a memory care center, he had been physically strong, still able to read the Bible and a newspaper and play dominoes. But he couldn’t remember not to walk in front of cars or hug strangers at the mall or that my mother had been battling cancer and needed rest. In his five years in full-time care, he lost more than 50 pounds, his glasses, his false teeth, his ability to eat the foods he most loved, and most of his power of speech. A fall from his bed led to a broken hip; he never walked again.

My father lived only a couple of months past this visit with Tyler. In those last weeks, he battled mysterious fevers and unexpected seizures and struggled to eat, drink, sit up, or lift his head. Eventually, he could no longer swallow. As he entered those final stages of Alzheimer’s, I was surprised to discover how many people were surprised to discover how my father’s body was betraying him. They thought Alzheimer’s was just a memory disease.

Realizing how many people held that misconception helped me understand a little better why the battle against this disease has been so slow and why it has been so difficult to obtain funding for medical research or community support for caregivers. If you think the worst that Alzheimer’s will do is make you forget a name, then you may not believe it needs the attention given to illnesses like cancer or AIDS.

So, I was very glad to be able to give Rep. Brownley’s young staff members a more realistic picture of Alzheimer’s true toll. And as I related my thoughts in the congresswoman’s office, the Alzheimer’s expert witnesses sitting around the table all nodded in agreement. “No one ever died from memory loss,” one of them said. Yet Alzheimer’s disease currently has a 100 percent fatality rate.

My dad lost his fight with Alzheimer’s last October, but I’m not planning to  quit fighting for more understanding of this disease, for more funding for research, for more support for caregivers, for better care for patients. And I am happy to know that my local congresswoman continues to fight for those issues too.

I had a book manuscript that had a thorough edit by a copy editor, but there were many changes made and I wanted another set of eyes to look at  it carefully. So I hired Tammy Ditmore to do a “fina… END_OF_DOCUMENT_TOKEN_TO_BE_REPLACED

Tammy is just amazing. Before my book made it over to Tammy, I had used two editors — one a well-known author in NYC. I was unhappy with the editing, and basically Tammy was my last try before I jus… END_OF_DOCUMENT_TOKEN_TO_BE_REPLACED

I appreciate Tammy’s willingness to ask questions when appropriate, flex on deadlines, offer sound advice, and rewrite sentences or sections as needed. Her command of substantive and copy editing ma… END_OF_DOCUMENT_TOKEN_TO_BE_REPLACED

Tammy was a pleasure to work with on my manuscript. Her honoring of my voice was top notch. She entered my story so thoroughly and went above and beyond to make my words shine brighter than I could h… END_OF_DOCUMENT_TOKEN_TO_BE_REPLACED

Tammy is much more than an enormously talented editor. For me, she was my guiding light during the critical final stages of the evolution of my book. Not only can she transform a manuscript by making … END_OF_DOCUMENT_TOKEN_TO_BE_REPLACED

Personally, I feel the editing process is the most important aspect of writing–it can be a nightmare if the editor and the writer are not on the same page. … Tammy knows what she is doing, she is easy… END_OF_DOCUMENT_TOKEN_TO_BE_REPLACED

I highly recommend Tammy Ditmore to you. She has edited three of my books in the past two years. Each time, I have been impressed with her professionalism, and pleased with her ability to provide a po… END_OF_DOCUMENT_TOKEN_TO_BE_REPLACED