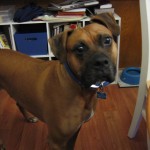 I have tried to use this blog mainly for reflections on editing and writing, but today I feel compelled to offer a few words about the dog who shared our home for almost seven years. We had to say goodbye to Porter today. We had known this day was coming soon, but knowing that has not made it a whole lot easier.

We got Porter from friends who got him from friends who got him from a rescue shelter. So we never knew a lot about his background or even his age. He was listed on the few records we had as a “boxer mix,” and there was no mistaking his boxer heritage—or the fact that there was more to him than that. Whenever anyone asked me, I would say Porter was a “boxer mixed with something big and dumb.”

He was definitely big. Close to 100 pounds, enormous head, big barrel chest. More like a pony than a puppy. His whip-like tail would leave bruises on our legs and bring tears to our eyes if he caught us with it in one of his frenzied greeting rituals. I frequently cautioned visitors, “Don’t worry about his teeth but stay away from his tail.”

Definitely not terribly bright either, although describing him as “dumb” is probably a little harsh. He ran into furniture and walls and seemed to get lost in our own small house sometimes. He could never learn to fetch a ball or understand that he couldn’t use brute strength to open all doors. But he made up for the limited intellect with deep, abiding love and loyalty.

Porter didn’t come to live with us until he was about six years old. We didn’t know a lot about his history but did know he had been in at least three homes and spent several years in a rescue kennel. We were a little nervous about how he would react to us and how we would adjust to him.

But he settled in with our family quickly and demonstrated repeatedly that he just wanted to please us. I only had to shoo him off the couch once or twice before he figured out that would not be his perch in this home, even though it had been allowed in his last home. Although he never met a dog toy that he couldn’t destroy within a few days (if not hours), he never chewed up a single thing in our house that hadn’t been expressly given to him, passing up numerous opportunities to claim toys and clothes that were constantly left in his reach.

We quickly learned that Porter had some very unique traits. He never barked to let us know that he wanted to go out; instead he danced. He would start slow, with just a little tap of his massive front feet—toenails first—on our laminate floor. If we didn’t respond quickly enough, he would add in some hind-leg action. Before long, he would be tapping and spinning like an Irish dancer and creating a ruckus that just couldn’t be ignored. And he never barked when he wanted to be let in either; he just swiped the door with one of those enormous paws. I was often amazed that he didn’t shatter the glass in the sliding door.

We got Porter near the peak of his (neutered) manhood, and he attracted a lot of attention whenever we took him out; his massive size and ferocious appearance intimidated a lot of people but intrigued others. Once, when we were at the park, a group of young men approached to admire him. “Awesome dog, man. Can we give him some meat?”

Dogs also seemed to take an extra measure of interest in Porter, with the smallest ones often the most eager to challenge him. I can’t count the number of times toy poodles, Chihuahuas, or Yorkies rushed at him, barking madly, ready to attack. Porter rarely took an aggressive posture, but every now and then, when a dog challenged him in that way, he transformed in the blink of an eye from sleepy-eyed beast to snarling attack dog who clearly knew how to use his size and strength to his advantage. It didn’t take me long to decide he was not a good candidate for the dog park.

But for the most part, we had a gentle giant on our hands. Groomers and vet assistants and others praised his sweet disposition. He rarely objected in any way to being poked or prodded, pushed or pulled. Jonathan, my younger son, delighted in laying in the floor and propping himself on Porter while reading or watching TV, creating the ultimate pillow pet.

About six months ago, Jonathan talked us into bringing home a rescue puppy from a nearby pet store; Porter had slowed considerably by then, and Jonathan was eager to have a more active companion. I was worried about how Porter would react, and at first he was none too pleased to suddenly be sharing his pillow and toys and attention. But the puppy adored Porter, and it only took her a few days to worm her way into his big heart. They began engaging in long play fights, chasing each other around the house with ferocious-sounding snarls and growls and snapping of teeth; then they would collapse together into a sleepy heap. I was amazed to see Porter allowing the puppy to take toys and treats right out of his mouth and loved how he seemed to want to protect her.

We brought Porter to live with us primarily because I thought my sons, eight and thirteen at the time, needed a dog. I made sure the boys fed him and walked him, and that he slept in their bedrooms. And Porter was happy to be with the boys and my husband, performing his tail-whipping happy dance whenever they came home. But for some reason I never quite figured out, Porter chose me as his favorite.

Given the chance, Porter would be with me. He could be sound asleep on his comfy pillow in the corner, but if I left the room, he would get up and follow wherever I went. He would park his 100 pounds so close to the bathroom door that I frequently tripped over him on my way out. He loved to stretch out and snooze in my office while I worked and always wanted to be as close as he could possibly get, making it difficult for me to move my chair without rolling over an ear or tail or other body part. I was the only one Porter ever came to check on if I slept a little later than usual; he would push his way into the bedroom, stick his cold nose in my face and begin sniffing heartily—just making sure I was still breathing, I guess.

I admit that I didn’t always cherish such attention from this 100-pound beast who wanted to be my lap dog. I was frequently irritated by the way he always seemed to be looking for something, even after he’d been fed and walked and given his nightly treats. “What more do you want from me?” I would ask him. Slowly, I realized that he just wanted me. His tail would start thumping if I laughed or started speaking, even if I wasn’t talking to him. If I took the time to stop and provide a pat on his head, Porter could give me a look of such deep contentment that it would evoke the same emotion in me. How could I not love a creature who wanted only to love me and who would drag himself around on failing legs just to lay down near me?

Tonight, I know my life will be simpler without Porter; my house will be cleaner, my bills for pet food and vet visits will be lower; the demands on my time will be smaller. But I also know that my house will seem emptier and my life a little colder. And so I pause to remember all the ways Porter blessed our family and to be grateful for the years of love he gave us.

Bye bye, big boy. You’ve left a mighty big hole in our hearts. Thanks for giving us so many memories to help fill it with. 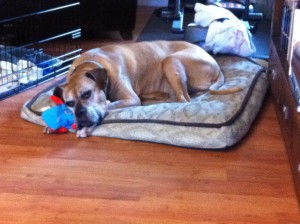 Tammy was a pleasure to work with on my manuscript. Her honoring of my voice was top notch. She entered my story so thoroughly and went above and beyond to make my words shine brighter than I could h… END_OF_DOCUMENT_TOKEN_TO_BE_REPLACED

Personally, I feel the editing process is the most important aspect of writing–it can be a nightmare if the editor and the writer are not on the same page. … Tammy knows what she is doing, she is easy… END_OF_DOCUMENT_TOKEN_TO_BE_REPLACED

I can’t believe my good fortune to have found Tammy to edit my nonfiction book. I had narrowed down my editor search to ten; then I took advantage of their free sample offers. Nine of the editors we… END_OF_DOCUMENT_TOKEN_TO_BE_REPLACED

Tammy Ditmore edited my book, The Quest for Distinction: Pepperdine University in the 20th Century. It was a huge assignment, requiring skills that set her apart from most professional editors. She re… END_OF_DOCUMENT_TOKEN_TO_BE_REPLACED

Tammy is just amazing. Before my book made it over to Tammy, I had used two editors — one a well-known author in NYC. I was unhappy with the editing, and basically Tammy was my last try before I jus… END_OF_DOCUMENT_TOKEN_TO_BE_REPLACED

Tammy is much more than an enormously talented editor. For me, she was my guiding light during the critical final stages of the evolution of my book. Not only can she transform a manuscript by making … END_OF_DOCUMENT_TOKEN_TO_BE_REPLACED