A Personal History of Persistence 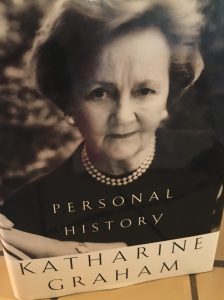 I don’t write book reviews often for this space, but this one is 20 years in the making, so it seems worthwhile.

Katharine Graham’s Personal History has been sitting on my shelf for a long time. A former newspaper journalist, I’ve long been interested in Graham, longtime leader of The Washington Post and one of journalism’s most influential and successful women. When her autobiography was published in 1997, my husband proudly presented me with a hardback copy of the book because he knew I would want to read it.

He was right; I did want to read it. However, at the time, I was no longer working in journalism. My days were filled with caring for a newborn and a five-year-old, and I had no time or energy to tackle 657 pages of densely packed text.

So the book was placed on a shelf, where it remained until I pulled it down a few weeks ago after watching The Post, the movie version of how The Washington Post took on the Nixon administration and published the Pentagon Papers. Graham was the publisher of the Post at the time, a position she took over when her husband committed suicide, and the movie does a marvelous job of portraying Graham’s groundbreaking role as a woman in the upper echelons of publishing and business.

I finally cracked open the book, eager to learn more about this trailblazing woman, and immediately found myself bogged down in the details of her parents and her very early life. I’m not gonna lie—the first half of the book was a slog for me. If I had not been so determined to finish it this time, I would have abandoned it around page 50. 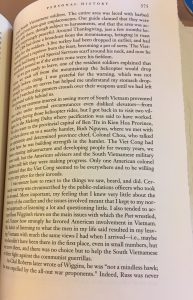 Nevertheless, I persisted (partly just to quiet my husband who has been taunting me for 20 years about not reading the book he so thoughtfully brought me). I set a goal of reading at least 10 pages a day, which carried me through the first 300 or so pages. At that point, I discovered that I was having a hard time putting the book down after 10—or 20 or even 50—pages. Eventually I was able to triumphantly close the book and return it to the shelf with satisfaction instead of guilt.

So, how was the book? Well, I work with memoir writers on a fairly regular basis, and if someone had brought me a text like this, I would say, “Too, too much! Too long; too many details; too many names; too many long excerpts from personal letters.” But Graham won the Pulitzer Prize for biography in 1998, so, obviously, other people appreciated the book more than I did. But this is my review on my blog, so I get to give you my opinion.

I probably would not recommend this book to a casual reader. But it’s absolutely worth the time and effort if you’re fascinated by journalism or want to know more about the lifestyles of the rich and famous in the twentieth century. And it’s especially worthy if you want to read about how one woman clawed her way out of the box society had crafted for her to become one of the most influential women of the twentieth century.

Graham makes no secret of the fact that she was born to wealth and privilege. But she was also born a female in an era where even women of the highest means and education didn’t aspire to much beyond wife, mother, and gracious hostess. So she didn’t think twice in the early 1940s when her father invited her new husband—instead of the daughter who had been working in newspapers and learning the ropes from many angles—to join him in running The Washington Post. A couple of decades later, when her husband committed suicide, Graham felt unprepared and unqualified to take over that role.

Nevertheless, she did take over, and she persisted despite crippling self-doubt and pervasive bias against her because of her gender. She learned the ins and outs of publishing and business in general, growing more confident under the tutelage of men like Warren Buffet. And as the book moved from Graham’s reminiscences of dinner parties and foreign vacations to clashes with the Nixon administration and newspaper unions, I rarely had to resort to my 10-page-a-day resolution.

Even if I can’t heartily recommend this book to most readers, I’m glad I read it. It gives me a much greater appreciation for the women who every day faced warnings from outside forces and internal voices that they were not capable of crossing invisible lines and breaking unwritten rules. Nevertheless, Graham—and others like her—persisted.

I have benefitted from their persistence. And I am glad that I persisted in reading a book that at times tested my patience and attention span. Because reading Katharine Graham’s personal history of courage and determination in the face of seemingly insurmountable roadblocks gives me a bit more courage and determination to persist in my own life and makes my own roadblocks look a little more manageable.

Tammy was a pleasure to work with on my manuscript. Her honoring of my voice was top notch. She entered my story so thoroughly and went above and beyond to make my words shine brighter than I could h… END_OF_DOCUMENT_TOKEN_TO_BE_REPLACED

Personally, I feel the editing process is the most important aspect of writing–it can be a nightmare if the editor and the writer are not on the same page. … Tammy knows what she is doing, she is easy… END_OF_DOCUMENT_TOKEN_TO_BE_REPLACED

I can’t believe my good fortune to have found Tammy to edit my nonfiction book. I had narrowed down my editor search to ten; then I took advantage of their free sample offers. Nine of the editors we… END_OF_DOCUMENT_TOKEN_TO_BE_REPLACED

Tammy Ditmore edited my book, The Quest for Distinction: Pepperdine University in the 20th Century. It was a huge assignment, requiring skills that set her apart from most professional editors. She re… END_OF_DOCUMENT_TOKEN_TO_BE_REPLACED

Tammy is just amazing. Before my book made it over to Tammy, I had used two editors — one a well-known author in NYC. I was unhappy with the editing, and basically Tammy was my last try before I jus… END_OF_DOCUMENT_TOKEN_TO_BE_REPLACED

Tammy is much more than an enormously talented editor. For me, she was my guiding light during the critical final stages of the evolution of my book. Not only can she transform a manuscript by making … END_OF_DOCUMENT_TOKEN_TO_BE_REPLACED

Spencer Demetros, author of The Bible: Enter Here
← Prev: Can I Trust Word's Grammar Checker? Next: Celebrating Those Who Go Forth →