I’m super excited about attending the Independent Book Publishing Association’s Publishing University next month. And I’m even more excited about the trip because I’ve been granted an affiliate scholarship on behalf of the Small Publishers, Artists and Writers Network. 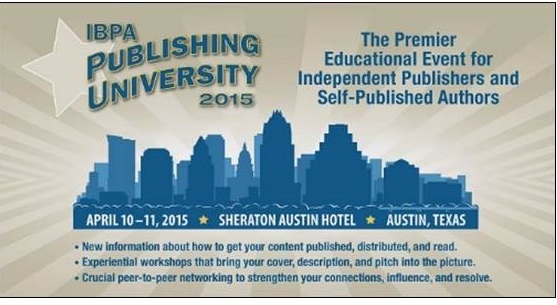 The Independent Book Publishers Association (IBPA) is the largest professional publishing association in the country, and it serves the independent publishing community by providing advocacy, education, and tools for success. Nearly 300 book publishing professionals from across the country are expected to attend this 27th annual Publishing University: a two-day, networking, and educational event focused on issues important to indie publishers and self-published authors.

I attended PubU in 2012 because I wanted to learn more about the publishing world, which I felt was changing so rapidly that I couldn’t keep up. In a blog post about that trip, I wrote, “After sitting through this kind information onslaught for a couple of days, I am feeling incredibly optimistic. Why? It’s a bit hard to say. But I think mainly because it feels like I’ve walked into an industry that is re-creating itself.” Three years later, I’m still convinced of that truth.

Attending PubU in 2012 introduced me to many aspects of publishing that were new to me and to many people who were generous with advice and their ideas. It also gave me a chance to contribute for the first time to the SPAWN newsletter, when I wrote an article titled “Ignore Social Media at Your Own Risk” for the August 2012 newsletter.

This year, I’ll be offering daily updates to SPAWN members from this year’s PubU, probably in the form of Tweets and blog posts and Facebook updates and maybe even through a video chat. Looks like I won’t be at risk for ignoring social media this year!

Let me know if you’ll be at PubU too!

I had a book manuscript that had a thorough edit by a copy editor, but there were many changes made and I wanted another set of eyes to look at  it carefully. So I hired Tammy Ditmore to do a “fina… END_OF_DOCUMENT_TOKEN_TO_BE_REPLACED

Tammy is just amazing. Before my book made it over to Tammy, I had used two editors — one a well-known author in NYC. I was unhappy with the editing, and basically Tammy was my last try before I jus… END_OF_DOCUMENT_TOKEN_TO_BE_REPLACED

I appreciate Tammy’s willingness to ask questions when appropriate, flex on deadlines, offer sound advice, and rewrite sentences or sections as needed. Her command of substantive and copy editing ma… END_OF_DOCUMENT_TOKEN_TO_BE_REPLACED

Tammy was a pleasure to work with on my manuscript. Her honoring of my voice was top notch. She entered my story so thoroughly and went above and beyond to make my words shine brighter than I could h… END_OF_DOCUMENT_TOKEN_TO_BE_REPLACED

Tammy is much more than an enormously talented editor. For me, she was my guiding light during the critical final stages of the evolution of my book. Not only can she transform a manuscript by making … END_OF_DOCUMENT_TOKEN_TO_BE_REPLACED

Personally, I feel the editing process is the most important aspect of writing–it can be a nightmare if the editor and the writer are not on the same page. … Tammy knows what she is doing, she is easy… END_OF_DOCUMENT_TOKEN_TO_BE_REPLACED

I highly recommend Tammy Ditmore to you. She has edited three of my books in the past two years. Each time, I have been impressed with her professionalism, and pleased with her ability to provide a po… END_OF_DOCUMENT_TOKEN_TO_BE_REPLACED