Learning the Worth of Editors at PubU 2015

PubU 2015 was jam-packed with information and interaction, giving me a chance to learn from publishing veterans with expertise in every facet of book publishing, including design, printing, distribution, copyright, and marketing. There will be more details about what I learned in later posts and articles, but today I’m focusing on what I learned that affects me most directly.

As an editor, the most encouraging news for me was that everyone I talked to said editors play a vital role in producing quality books. I heard that from book designers, from managers of independent publishing firms, from writing coaches, from publishing consultants, from marketing experts, and particularly from authors.

One author told me she feels like she should send flowers to her editor every day because the editor had taken her good idea and helped shape it into a beautiful book. Another author described editors as wizards, waving a wand over a collection of drab words so that they sparkle and shine like jewels. 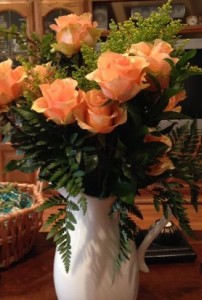 Unfortunately, I also heard from a couple of authors who didn’t have kind words for their editors. One told me her editor tried to change carefully-researched text based on quick Internet searches. Another told me his editor had left a number of errors, which he only discovered when they were pointed out by his indexer.

The good stories inspired me; the bad ones dismayed me. Both reminded me that an editor can work magic or create havoc. And both make me want to work harder at this craft that is also a profession.

After all, what editor wouldn’t appreciate daily flowers from her authors?

Tammy was a pleasure to work with on my manuscript. Her honoring of my voice was top notch. She entered my story so thoroughly and went above and beyond to make my words shine brighter than I could h… END_OF_DOCUMENT_TOKEN_TO_BE_REPLACED

Personally, I feel the editing process is the most important aspect of writing–it can be a nightmare if the editor and the writer are not on the same page. … Tammy knows what she is doing, she is easy… END_OF_DOCUMENT_TOKEN_TO_BE_REPLACED

I can’t believe my good fortune to have found Tammy to edit my nonfiction book. I had narrowed down my editor search to ten; then I took advantage of their free sample offers. Nine of the editors we… END_OF_DOCUMENT_TOKEN_TO_BE_REPLACED

Tammy Ditmore edited my book, The Quest for Distinction: Pepperdine University in the 20th Century. It was a huge assignment, requiring skills that set her apart from most professional editors. She re… END_OF_DOCUMENT_TOKEN_TO_BE_REPLACED

Tammy is just amazing. Before my book made it over to Tammy, I had used two editors — one a well-known author in NYC. I was unhappy with the editing, and basically Tammy was my last try before I jus… END_OF_DOCUMENT_TOKEN_TO_BE_REPLACED

Tammy is much more than an enormously talented editor. For me, she was my guiding light during the critical final stages of the evolution of my book. Not only can she transform a manuscript by making … END_OF_DOCUMENT_TOKEN_TO_BE_REPLACED