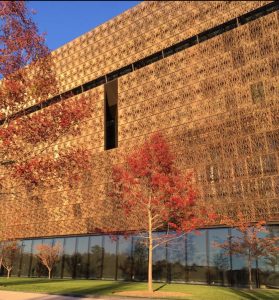 A couple of months ago, I got the chance to spend the day at the new National Museum of African American History and Culture. It’s beautiful, fascinating, troubling, and inspirational. And it reminded me that the battle for justice has been long and brutal — and that it continues.

Today, on the day that our nation has set aside to honor the life and work of Martin Luther King Jr., it’s easy to think of him as a national hero. But that current hero status can also make it too easy to forget that his battles were not won solely by eloquent speeches or persuasive logic. 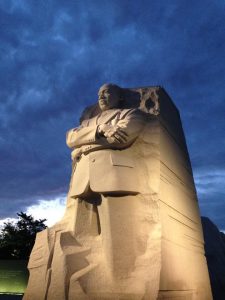 We want to remember the rallies and the awards and the monuments and prizes and forget the threats and the jail sentences. We’d rather not know too much about all the ways our country tried to silence King and his movement for civil rights in the name of “peace” and “social order.” We want to think of King as an unstoppable force — even when we know that an assassin’s bullet stopped his life.

Spending a day at the the African American history museum reminded me that history is long and that battles for justice are not won quickly or easily. When we look back, we like to let our eyes rest on the high points — the Emancipation Proclamation and the Civil Rights Act. When we focus on the historical high points, we get to gloss over the battles that preceded — and followed — them. We get to look away from beatings and lynchings and murders and housing segregation and unequal education and bank redlining.

Jefferson: his words, his slaves

Even a brief trip through the Museum of African American History and Culture will open your eyes to the battles, the darkness. (If you can’t get to DC this weekend, spend a few minutes watching a documentary or a movie or reading a book or article about King or the Civil Rights movement. If you don’t know where to start, check out the Wikipedia page on the Civil Rights Movement.)

But although the museum did not let me look away from the darkness, its exhibits also revealed the light by telling stories of people who fought for change. Because even in the darkest hours and years and centuries, there have always been a few who were fighting for change, fighting to advance the cause of justice.

Women and men from all races and from all regions and all walks of life have fought battles small and large to help the United States live up to the premise it was founded on: that all men are created equal and all are endowed with unalienable rights. Many of those people saw little progress in their lifetimes, but even small drips of water will wear away rock. 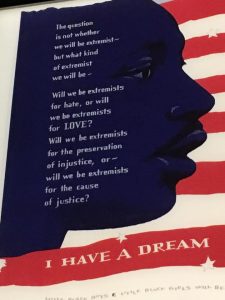 From King’s 1963 “Letter from a Birmingham Jail”

And when trickles of water are joined, they can become a stream, and if enough of those streams join, they eventually form a river. And with God’s help and our perseverance, rivers can become mighty forces that change a landscape forever — allowing justice to roll down like mighty waters and shaping righteousness into an ever-flowing stream.

May we all continue to dream — and work — toward that day.

Tammy was a pleasure to work with on my manuscript. Her honoring of my voice was top notch. She entered my story so thoroughly and went above and beyond to make my words shine brighter than I could h… END_OF_DOCUMENT_TOKEN_TO_BE_REPLACED

Personally, I feel the editing process is the most important aspect of writing–it can be a nightmare if the editor and the writer are not on the same page. … Tammy knows what she is doing, she is easy… END_OF_DOCUMENT_TOKEN_TO_BE_REPLACED

I can’t believe my good fortune to have found Tammy to edit my nonfiction book. I had narrowed down my editor search to ten; then I took advantage of their free sample offers. Nine of the editors we… END_OF_DOCUMENT_TOKEN_TO_BE_REPLACED

Tammy Ditmore edited my book, The Quest for Distinction: Pepperdine University in the 20th Century. It was a huge assignment, requiring skills that set her apart from most professional editors. She re… END_OF_DOCUMENT_TOKEN_TO_BE_REPLACED

Tammy is just amazing. Before my book made it over to Tammy, I had used two editors — one a well-known author in NYC. I was unhappy with the editing, and basically Tammy was my last try before I jus… END_OF_DOCUMENT_TOKEN_TO_BE_REPLACED

Tammy is much more than an enormously talented editor. For me, she was my guiding light during the critical final stages of the evolution of my book. Not only can she transform a manuscript by making … END_OF_DOCUMENT_TOKEN_TO_BE_REPLACED